The v4/2 is the next generation brain of your robot or IoT device, powering over 20,000 robots worldwide! Give your custom robot or IoT project features inspired from science fiction! With the electronics protected by a stylish plastic shell, the ez-bv4 clips into your ezrobot Revolution chassis or custom robot. It is easily controlled over Wi-Fi using ez-builder software.

Introducing IoTiny, the smallest tiniest Robot/IoT controller of the EZ-B family. Powered by a 100mhz Cortex M4 ARM processor, the form factor gives you the ability to use custom enclosures or fit in the tiniest of places. Invent new IoT projects by easily controlling and automating nearly anything over the internet.

The IoTiny is a tiny EZ-B v4. The IoTiny operates the same as an EZ-B v4, which means the tutorials, software and examples apply to both products. Enjoy the power of EZ-Builder with the IoTiny, because it is compatible with the EZ-B v4/2 Wi-Fi Robot Controller features. Just, a little bit… tinier! 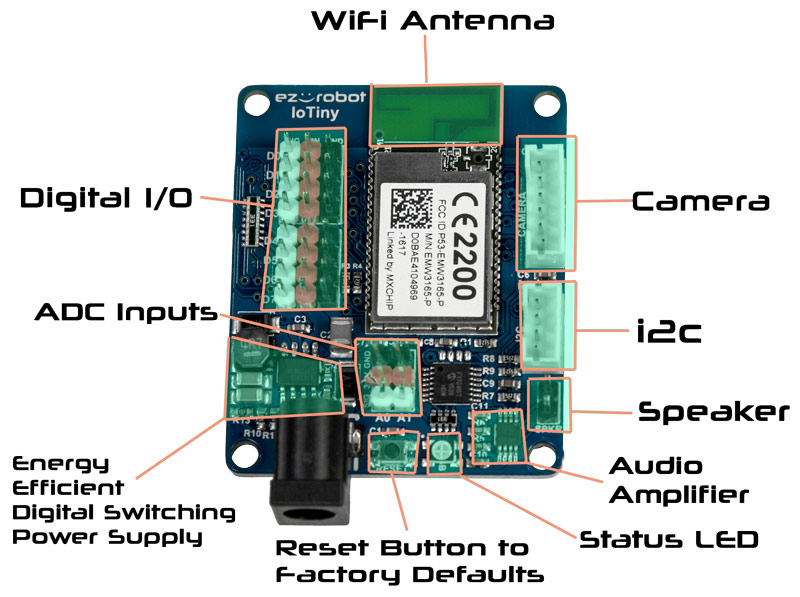 The EZ-B IoTiny can be controlled over WiFi using the graphical ez-builder software on your PC or mobile device, without needing to program. The less time you need to spend with compilers, hardware programmers, and debuggers, the more time you can spend building and designing robotic projects!

Give your robot or IoT project the gift of sight with live real-time streaming video. View the video on your mobile device or PC over the WiFi connection of the EZ-B.

Robots need a voice! The EZ-B has a built-in speaker to stream audio in real-time from the PC or Mobile Device. Play music, sound effects or even text-to-speech through your robot or IoT project.

In the classroom or at home, ezrobot Revolution has a big impact on STEM education. Learn about robots, and have fun doing it! With hundreds of tutorials, no questions are left unanswered. Personalizing your ezrobot with new behaviors will teach students how robots walk, see, hear and interact with their surroundings to solve problems using a combination of science, technology, engineering and mathematics. Visit the EZ-Robot School!

If hardware is the heart of your ezrobot, then software is the soul. Introducing ez-builder, the world’s easiest, most powerful, and most scalable robotics software. ez-builder takes a productive and unique approach to programming your robot. Simply add behaviors such as camera tracking, speech recognition, Wii controllers, GPS, gait animator, and hundreds more!

Use an Android or iOS mobile device with apps from our ez-cloud app store to control your robot or IoT project. Have an idea for a robot app? Create a robot app and share with it the world. ezrobot makes everyone an app developer!

You care about energy consumption with electronics. That’s why ezrobot designed an innovative low energy digital switching power supply for our products. While most electronics dissipate heat to lower voltage, our products use an energy efficient power supply which generates practically no heat! Welcome to the future! 🙂

EZ-Robot Revolution introduces the world’s easiest, most powerful and creative robots for R&D, experimentation and STEM education. Revolution is modular, so there is no limit to your creativity. These robots are assembled with ez-bits using clip’n’play technology for endless configurations!

At the heart of your Revolution Robot is our exceptionally compact, intelligent and powerful EZ-B family of robot brains. The EZ-B provides features to your robot thought only possible in science fiction with walking, talking, and learning capabilities. The EZ-B v4 brain gives robot creations the ability to learn, interact and play. Meanwhile, the EZ-Robot camera equips robots with the ability to recognize faces and track objects. Using a PC or mobile device, control EZ-Robots over a Wi-Fi connection. The EZ-B brain leverages the power of Cortex ARM processors. The EZ-Robot brain is expandable to grow with your robot by supporting dozens of additional sensors, displays and servo-motors.

EZ-Robot is first in the industry to successfully provide a complete unified robot platform which combines powerful hardware, clip’n’play modularity and innovative software that pushes the limits of robot technology. The EZ-Builder software controls, programs and shares EZ-Robot Revolution behaviors, configurations and personalities. Customize Revolution Robot with EZ-Builder’s easy-to-use 3D graphical designer and share the configuration on the EZ-Cloud App Store within the globally community. Programming an EZ-Robot is graphical, easy and scales between beginner and advanced users. You can even make your own mobile apps with a simple drag-and-drop interface which run on your iOS or Android device, instantly. There is absolutely nothing else like it!

A future of robotics needs education, today. Revolution isn’t limited to fun and games, EZ-Robot empowers educators to teach real-world robot applications which give students a leading-edge advantage in the up and coming robot industry.

EZ-Robot products offload processing to more powerful third party CPUs, such as an iOS/Android mobile device, tablet, or PC. This approach provides users with an easy-to-use and feature rich development environment which, unlike competitive products, is not limited to programmers. This approach not only saves weight and space on the robot chassis, but also power consumption. This is an efficient approach to direct battery consumption where it is needed on a robot most… to its motors.

Using PCs and Mobile Devices for the Robot GUI offers high level (easy) and low level (difficult) programming features, neither of which sacrifice functionality. This enables creative designers, dabblers and programmers to produce robots which would otherwise require teams of programmers and engineers years of work.

Competitive products which offer embedded device programming ability (i.e. microcontrollers) require advanced programming experience, which contradicts educational and mass-adoption initiatives – not everyone is a programmer or has an interest in programming. While embedded device programming has historically been a familiar method in robotics, today’s highly computational and feature-rich products require distributed processing. This methodology splits the robot industry into several fields and categories. Similar to other developed industries (automotive, computers, medical), robotics is splitting into many fields of discipline. Each discipline’s responsibility is becoming too advanced for an individual to be great at all of them. EZ-Robot’s user workflow was architected for this approach. While competitive robot products focus on either programming (microcontrollers) or usability (toys), EZ-Robot differs by providing components for all disciplines within the industry of robotics. 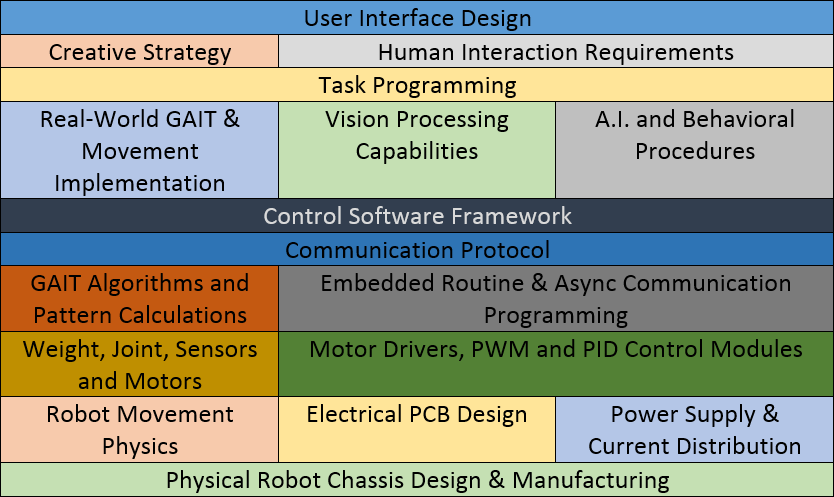 Where Do I Start?

Interested in a career in a field of robotics? As you can see, robotics is dividing across many fields, each with their own discipline. What responsibility from the list above interests you? There are many disciplines, which is why the term “roboticist” is a career title of the past. When focused on a single task, we do it really great. Each discipline of robotics also requires immense focus, which is why learning with EZ-Robot is your best option. We provide hundreds of complete software controls and unified hardware to “fill in the blank” of disciplines that you do not find interesting or are too challenging. Perhaps you enjoy designing movements, but not programming. Or, maybe you enjoy vision capabilities, but not electronics. With EZ-Robot, focus on customizing the behaviors that you are interested in, and leave the rest to us!

Mobile version: Enabled
Back to top

Use the search box to find the product you are looking for.

No products in the cart.